The data analyzed in this post come from RePEc which is a collaborative project well-known by economists. It gathers links to working papers, journal articles or software components and also provides a ranking of more than 30,000 registered economists. This ranking is calculated by taking a harmonic mean of the ranks of many criterion considered such as the number of works, the number of citations, the H-index, the number of followers on twitter, etc… For a complete list of the criteria used, please see : https://ideas.repec.org/top/.

To scrap the data, I used the R package rvest and the useful functions associated with this package: read_html, html_nodes and html_text to get the data for the top 5% economists, top 5% women economists and the top 5% in 2007. More precise information on the package is available here.

For my basic needs, I used the following lines of code to extract the data:

2. Information from the data

American universities dominate this ranking with more than 50% of the top ranked economists affiliated with a US university. Harvard University is the first institution in terms of the number of top 5% economists with 33 economists out of the total 2,489.

California is the state/country that gathers the highest number of top economists with 218, followed by the UK with 207 and then the state of Massachusetts with 193.

3. Number of economists per million population

Using the package rworldmap and data on population found on wikipedia, I constructed a map of the number of economists per million population. To have more precise info on how to use the rwolrdmap package, please read the very good introduction that I used here.

We can see that amongst the countries in Europe, the UK, Sweden, Switzerland, Belgium, Netherlands are the countries for which the number of top economists per million population is the highest.

4. Evolution of the ranking

Using the wayback machine, I retrieved data from 2007 to compare with data from 2017. On average, the people who were present in the data for both 2007 and 2017 have lost 131 places in the ranking. The most significant improvement in ranking has been seen in the placement of Martin Feldstein, who gained 1,435 places in 10 years and is now ranked 15. 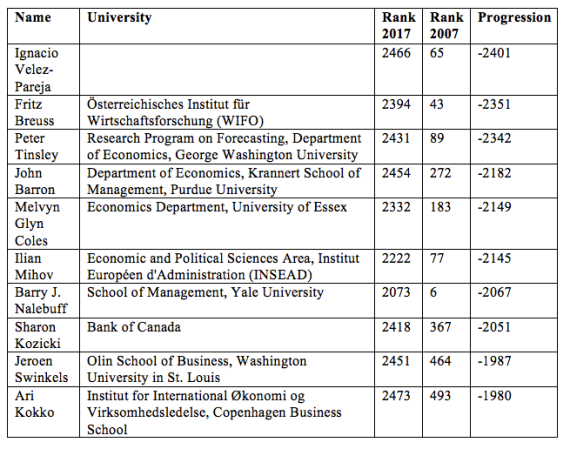